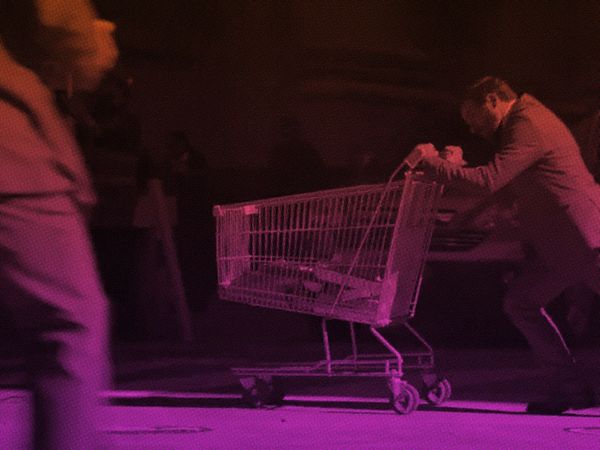 For anyone not following CryptoTwitter (CT), a schoolyard bout of name calling has erupted with gold advocates in response to Grayscale’s silly advertising campaign.

The national television advertisement portrays gold investors trying to manage their physical gold holdings in what looks to be New York City. People “throw off the chains” of heavy, outdated gold and are urged to buy Bitcoin instead. The propaganda piece was published by Digital Currency Group, the largest crypto VC fund in the world. DCG owns Coindesk, Genesis Trading and invested in a multitude of other projects to include Coinbase, Ripple, Coinlist, Circle, and Protocol Labs. Barry Silbert, CEO of DCG and Grayscale, told Yahoo the following:

“We do not see this as a Grayscale commercial. For us, #DropGold is our ‘Got Milk.’ This campaign is first and foremost focused on starting a conversation about bitcoin vs gold. If the ad makes people want to get into bitcoin, we’re completely indifferent about how they go about doing it.”

“There has been a very strong marketing push from the gold industry that gold is the only and the best store of value in periods of economic uncertainty. That may be true. But now you have bitcoin, which, in our opinion, provides all the same attributes as gold—it’s fungible and scarce and you can’t counterfeit it—but the big difference is that bitcoin actually has utility. Gold doesn’t have much utility beyond jewelry. And gold doesn’t have the accessibility. Anyone with internet can access bitcoin. So what bitcoin may lack in history, it more than makes up with utility and accessibility.”

“We’re not making the pitch that you should buy your coffee with bitcoin. We are saying that bitcoin is better at doing gold’s job than gold has been in the past few decades. We believe that in the long run, bitcoin will be a better store of value than gold.”

Gold bugs quickly took offense to the ad, with Peter Schiff leading the charge on Twitter. He rightly charged that Bitcoin is not gold, nor will it ever be a similar asset class to gold.

The idea that Bitcoin is just like gold is utter nonsense. Bitcoin is nothing like gold. It’s fool’s gold. There is not a single use case where Bitcoin can be used as a substitute for gold. Plus the gold price never falls by over 25% in less than 24 hours!

Bitcoin is a speculative digital asset created by cypherpunks 10 years ago for the express purpose of undermining existing government created financial structures. Gold on the other hand has been foundation for currencies across the globe for more than 5,000 years and is embraced by central bankers, governments and investors around the world.

Both gold and Bitcoin prices have risen recently, causing many to erroneously conclude that the two are rising for the same reason. But stock and bond prices are also rising. Bitcoin and stocks are rising as speculative assets, while gold and bonds are rising as safe havens.

Both Slibert and others on CT point to the gains Bitcoin has made over the past ten years, with the digital asset rising from pennies to 20,000 at the end of 2017. From its lows in 2015, it rose in price more than 1130%, but in the year following dipped down 78%.

The question though that Barry posed is/will Bitcoin be a better store of value than gold? For those that bought at the top, Bitcoin has not been a great store of value. Additionally, in its current form, massive volatility precludes any argument for being a long term SoV.

Bitcoin is designed from its core to continue to function like this, 1 Bitcoin will always be 1 Bitcoin and there will only ever be 21 million created. This creates liquidity issues due to Bitcoin's ownership being extremely top heavy, with 18,000 wallets owning 62% of the total supply. I would further guess that a large majority of Bitcoin is owned by a few thousand people. It only takes one of them to dump their holdings on the market to move prices. A seller dumping 5,000 BTC will have the same effect regardless if the price is 1k, 10k, or 100k.

Thus, Bitcoin's volatility is incredibly high. Though it has declined since its inception, recent price swings of 20% in a day are common. Gold's price moves around 0.02% a day. Asset volatility provides the opportunity for extraordinary growth, yet also unrecoverable losses. Taking a plunge on BTC depends wholly on when you enter the market. If an investor bought below 10,000 USD, they are in profit, but anyone else will still be underwater and has been since January of 2017.

Gold right at the all time highs versus a basket of 27 currencies, excluding the USD. Gold does a great job of protecting purchasing power on a globalised basis, which is how it should be viewed as a pure expression money/store of wealth. pic.twitter.com/fbt8ZTx8jy

Gold was and continues to be a backstop for the financial economy because of its low price volatility. During risk-off events, investors turn to bonds, gold and other precious metals to prevent value loss and to hedge against fiat currency devaluation. Never in its ten years of existence has Bitcoin been a safe haven asset, nor will it ever be so long as high volatility persists. Some have argued that the latest run up in price is due to Chinese investors using Bitcoin as means for capital flight, this may be true, however there are easier ways to abscond funds from China safer than with Bitcoin.

During the Great Financial Crisis, global liquidity froze, and asset prices dropped precipitously. Banks were unable to fund repo because their inventories were mostly mortgage bonds, so they turned to gold as a collateral of last resort. In times of great calamity and unease, gold has been and will be the safe haven asset that even the world’s top bankers turned to. Regardless of the monetary theory popular in the current day, gold serves an important part in acting as a store of wealth.

Another benefit of gold is that Mining of precious metals creates desirable salaried jobs for the local community from which they are extracted. Bitcoin mining creates almost none. “Per MW of capacity, cryptominers create one one-hundredth of the jobs we would typically see from an industrial user with the same power needs,” he argues. “Typically, if a company moves into the area they’ll build a factory – that takes six months, offers jobs and invests them in the area. Cryptominers can come and go in a weekend – it’s the most footloose industry I’ve ever seen, the most energy intensive industry and the least labour intensive,” said Colin Read, mayor of Plattsburgh, a hub for crypto mining.

Bitcoin probably is a good speculative investment even though this mass market messaging propaganda piece is misguided. It’s hard to easily explain that adding a non-correlated highly volatile asset to your portfolio in small amounts could boost your returns by a few percentage while taking the same risk. Adding 1-5% of Bitcoin to your portfolio could boost your overall returns, or incur major losses. If it’s only a small part of your total portfolio than the risk balances out.

In fact this strategy is exactly what Greyscale proposes in their investment document "Bitcoin & the Rise of Digital Gold." According to their research, a well balanced portfolio of equities would have seen a 5% increase in returns with a 5% allocation to Bitcoin starting in Jun 2016. The start date is cherrypicked as it was the start of the 2017 bull market. The returns would have been negative or flat had they chosen to start in January 2018.

Price risks are out of the question for gold. It is Lindy at this point. Bitcoin is theoretically Lindy, but history must play out before any validation of this claim can be made. Only in several decades will a final judgement on Bitcoin become possible. Until then, speculative proclamations and guesses as to the future of the digital currency will continue to abound. My only hope though is that a certain someone loses a valuable appendage before any high-flying predictions come true.

In a hundred years I can with a very high probability say that gold will still be valuable and apart of the financial system. Bitcoin on the other hand I can not say with any certainty about the next decade. Will Bitcoin retain its status as top cryptocurrency? Are Zuckbucks, the FAANGs, and Silicon Valley the future of digital assets? Will central bankers rally together to create a global decentralized reserve currency? Will the delitrious effects of Bitcoin mining be outlawed in China, Europe or other parts of the globe? There are too unknowns present to say with a high certainty that Bitcoin or any other non-governmental non-corporate digital asset will retain value over a medium or long term time span.

Everyday miners must extract millions of dollars from the network to pay for their operations. If new money fails to invest, prices will fall as miners typically sell to remain profitable immediately and hodl the extra Bitcoin as an investment for future higher prices. Peter Schiff as well owns a gold bank, vault and sales services for the precious metal. He is also pushing an agenda, but his is one that has been tested by time.

The beauty of building a portfolio is that you don't have to choose between gold and Bitcoin. This is what makes the #dropgold campaign asinine and unproductive. A well balanced portfolio should probably contain both assets. Assets don't compete, they correlate and coexist. While Slibert and DCG might want you to think that "dropping gold" is the new, popular, smart thing to do, remember that they have a vested interest in the price of Bitcoin going up.