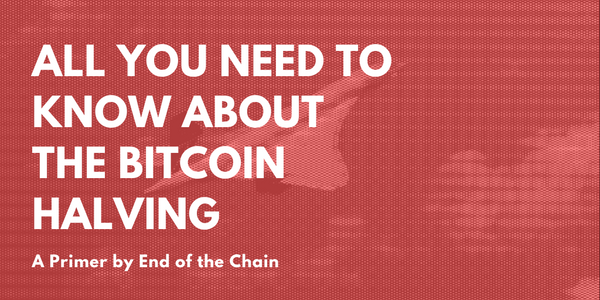 In the beginning Satoshi created the Genesis Block.

On January 3rd, 2009, the anonymous developed Satoshi Nakamoto mined the Bitcoin Genesis Block and received 50 BTC to an unspendable address. 612,931 blocks later and with mining difficulty at 14,776,367,535,688 hashes, Bitcoin is approaching its third Halving, a predetermined time when the reward issued per block is reduced by 50%.

Only 21 million Bitcoin will ever exist. The supply is finite. After 150 years all of the supply will be mined. Currently, a bit more than 18 million BTC is in circulation, approximately 85% of total supply.

And the block was without form, and void; and darkness was upon the face of the ledger. And Satoshi said, Let there be coinbase: and there was coinbase.

Every time a Bitcoin block is mined, a part of the 21 million coinbase is rewarded to the miner who solved the hash function. At set block heights, the coinbase payout is halved increasing the difficulty of how hard it is to mine a block.

In the first years of Bitcoin, 50 BTC was paid out every block, and 10.5 million BTC was mined in the first four years of its existence. On 28 November, 2012, the first halving reduced rewards to 25 BTC, and the second took place on 9 July, 2016, lowering block rewards to 12.5 BTC, where it remains as of today. Halving occur roughly every four years.

It's estimated that the third halving will occur on 12 May, 2020 and block rewards will drop to 6.25. We can only guess the date, as halving is determined by the total number of blocks mined, not a predetermined date. On average, Bitcoin blocks are mined every 10 minutes.

The last halving is expected to occur in 2140 when the 21-millionth BTC is mined. At this point it is expected that miners will derive the majority of their revenues from transaction fees paid by users.

And Satoshi saw the future block, that it was good: and Satoshi mined the solution from the hash.

Two halvings do not provide enough data to determine with high certainty their impact on price. Three main arguments can be made as to how Bitcoin's price will be impacted by the upcoming halving.

Many Bitcoin hodlers are bullish due to the massive price increases after the last two halvings. They expect that this event should play out the same as before; the halvings create a supply shock which reduces selling, demand stays the same or goes up and therefore price rises naturally.

Bitcoin miners are the assets only true sellers, as they are dependent on external resources to operate. Miners typically sell to fiat only what is necessary to fund operations. All profit is kept in Bitcoin and held for the long term. When miners revenues in Bitcoin are cut in half by halving, less Bitcoin is expected to be naturally sold. Thus, prices should rise after a halving.

One of the most popular models bulls use is Plan B's stock-to-flow (S2F), that finds extremely high co-integration between the ratio of stock (total supply) to flow (new supply) and the price of Bitcoin. After the third halving, Bitcoin will have a S2F higher than Gold after the halving. In theory this, along with greater adoption and demand, should lead to much higher prices.

Bitcoin's next halving date is well-known by current hodlers and traders. In anticipation of the event, speculators could drive up the price in the hope of continued increases.

No Effect on Price

The bull argument is heavily criticized for it violating the Efficient Market Hypothesis (EMH), where price reflects all currently known information. The halving dates are coded into Bitcoin and are public information, thus, its effects are already priced in.

By no means does the EMH run counter to S2F. It could be the case that 1)the halving is already priced in and 2) price could rise due to changes in S2F.

Last January miners and traders were both capitulating. Hash power hit all time lows along with Bitcoin's price. Since then, year on year Bitcoin prices and hash rate are up 150%.

Bulls argue that not everyone knows about the halving, even amongst Bitcoin hodlers understanding of the event is probably low. However, only a small amount of influential parties must know the information for it to have an impact on price. 10% of traders may be aware of the halving and that would be enough to impact price.

Almost no one subscribes to this view, but it could still be a possibility. Markets are notorious for moving against the herd. If the majority of people believe that price will rise post-halving and it fails to do so, they may quickly become jaded and sell.

Another reason could be that miners' revenues are slashed in half, pressuring their businesses and eventually forcing them to shut down. If there was enough of a reduction in hash power across the network, it could open the door to security risks and cause a loss of faith in the value of the digital asset.