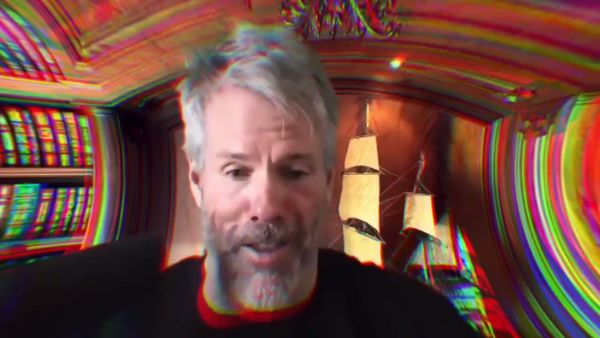 There was a post last night by my several time guest Patrick Dugan that caught my eye...

My first introduction to Bitcoin was back in 2011. I read the infamous Gawker article on the explosive growth of the Silk Road and how it was using Bitcoin as the currency of choice for illicit transactions. Me, being in the midst of my 4-year eternal party at St. Andrews, thought that this was the most innovative and groundbreaking thing in the world. Amazon/Ebay for drugs. Just buy some Bitcoin, download Tor and in a few days high quality party spritzers show up for you and your friends. It was lovely.

At that point in my life I wasn't so keen on investing as I am today. The inherent benefit of using Bitcoin (back then....definitely not now) over Paypal or a bank transfer was that the Feds wouldn't be showing up at your door immediately asking about your recent chemical acquisition. Bitcoin provided all parties settlement finality and a perceived veil of anonymity.

For its first several years, the bare facts on Bitcoin's function within the shadow economy was laid bare. It was and still is only a good payment vehicle for transaction types on the boundaries of grey descending into black. The whole premise of Bitcoin is for transferring value to some unknown, untrusted party banks normal would call Johnny FBI on. Decentralization is the lifeblood for grey and black markets.

The narrative shifted in 2016/7 subtlety with the birth of Ethereum. Decentralization wasn't just about transactions anymore. Computational decentralization was now possible. Bitcoin chose small blocks, crystalized its monetary policy 6 years into its life, for good or for worse, and began memeing its way into become the next global reserve currency.

At this point, influencers such as Saifedean, Boyapati, Held, and others start writing gold-bug inspired tales concerning the "hard-money" aspects of Bitcoin's supply cap and issuance rate. Decentralization and settlement assurances were no longer the main narrative. Driven mostly by Bitcoin's run up to $1000 in 2014 and $20,000 in 2017, the sole focus became price. Hodl sounded as the marching drum for this new wave of Bitcoiners. The amount of zero's exceeded my maximum cocktail limit. It was pure speculative insanity.

And out of this insanity is where Michael Saylor comes in. A boomer tech CEO with a slowly declining company and no idea how to invest a half billy, he turned to Bitcoin one day and said "I'm all in." He then proceeds to issue debt against his company by selling bonds, repeating until he acquires 114,042 bitcoins, or around .5% of supply. It's a shed ton of money at these prices, 7 billy in magical internet money.

Once he joins the club, Saylors new goal becomes to talk his bags.

Saylor drinks the hard money, global reserve currency hard. 21 million. Hardest currency ever created. Sell everything. There is only one Bitcoin, everything else will perish in fire in its wake. Converting unbelievers and denouncing the heretical Central Banks for their excessive money printing. He's hodling his Bitcoins for 100 years, never to sell. Cyberhornets.

Singlehandedly Saylor pumps the price from 10k to 60k. We all cheer. Yay.

Saylor probably cares little about grey and black markets. Or for Bitcoin's ability to nullify borders, enabling Iran and North Korea to access a readily available "Store of Value." Or self custody. The list is pretty big, but it doesn't matter. Only the price does.

Saylor has his Bitcoin's locked up with their custodian, probably an in-house solution. Other corps that follow them will use a qualified US custodian, same goes for institutional clients. Price action and shareholder demands invalidates "not your keys, not your crypto." I agree with this, no one should self custody more than a few hundred k of crypto. There's an exponential risk of masked Eastern-European types breaking into your house and beating you for your private keys.

Patrick is right, OGs care about different things, like paying for drugs in an online black market. Or sending donations to Wikileaks after they've been deplatformed. Bitcoin in this sense is the purest expression of free speech by means of money. Its price is irrelevant, so long as it achieves this goal.

Saylor's waxing on Bitcoin-as-hard-money serve as a marketing tool to expand the user base. Ultimately, more network usage and higher prices drives development of protocol enhancements like Lightning and Stacks. It's a win-win for everyone. But for many who came before, his words ring flat. Cypherpunk vs Cyber hornets. Pure free speech can only have different flavors, no one narrative captures it all.