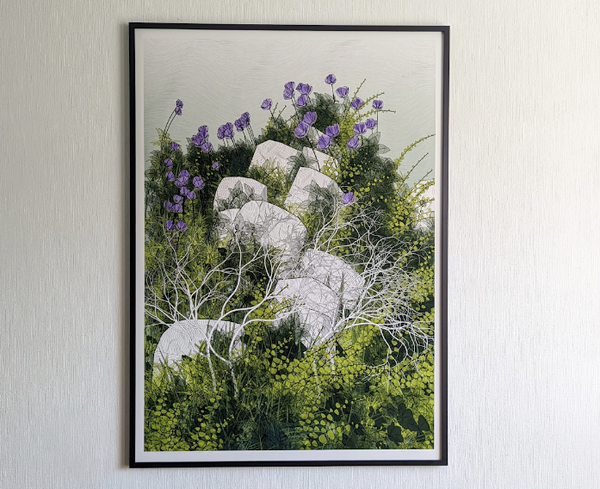 The essence of the digital is its replicability, transmissibility and standardization across systems. The digital form is neatly quantifiable and halts when asked. Code creates rails along which unimaginable amounts of data are passed every second. Our entire modern existence is predicated on the continuous proliferation of data.

It’s a large, framed, print of Zancan’s “Lushtemples — Highlights of the Hike.” A 1/1 NFT created in December of last year, now replicated in physical form and hanging in Pronoia.tez’s living room. Immense, brave, dynastic. Yes, I’d never sell this piece. Probably end up being like one of those overpriced watches “you never own a Zancan, you just pass it down from generation to generation.”

What’s funny about all of this is that while we talk about the immutability of these networks, the art and culture generated will always dissipate and be left to the following generations to pick up the pieces somehow. WIth new methods for documenting our lives at every step and second of the day, the task of the future archeologist or sociologist of the next mellenia will face a different task then our current day professionals. Instead of unearthing soil in the hopes of unearthing fragments of bone, pottery, jewelry and architecture, these digital detectives will seek digital gems of culture and art left behind in the sea of content.

At the rate that we’re producing just NFTs, future historians will never be able to view a single year’s content in their lifetimes. How many 10k pfp sets will be remembered in 3022? BAYC? Punks? At that point it will probably be fashionable for normies to use AI to sound hip and in like the greats of CT at the time. Cobie flavored voice packs and auto corrects for the neural implanted social network of the future (5 stars!).

Even now we lose data at an astounding rate. Most of the time we don’t even care. The geocities and MySpaces of lives past lose their appeal and fade without memories. Content becomes fleeting, a part of our lives which is shared and immediately swept away into value determining algorithms. At what point does reflection matter anymore? If we share our lives on a daily basis in disappearing short movies, what actually is valuable? What good is the billions of videos created daily that simply are wiped after a short period? Mass cultural production is but a glimpse into the present only valuable for 24 hours. Snap it, share it, forget it.

I have a whole box of my mother’s belongings in my attic and closet. In amongst the photobooks are letters from her youth, and also my grandfather’s time in the war. They provide an internal exposition of their emotional outpourings and concerns to family at that given moment. Opening the letters, paper faded, there are secrets contained giving a glimpse into his own experiences.

When my grandfather went to the war he joined whatever the media corps was called at the time. He traveled around Europe performing plays and hanging out with some of the most famous movie stars in the USA at the time. The letters are from him to his family discussing internal matters, and then also to other male actors describing his dreams and current mental state.

Most of my own communications are through Twitter, Telegram and sometimes email. After I’m gone my Telegram will self-destruct after 6 months of non-use. Twitter will remain as a monument, but I might request that my family remove it once I’m gone. Email, well, who actually uses emails to send messages? Given the impermanence of these three systems, there won’t be much in written text that will persist forever.

The digital is the message, even if it’s fleeting.

It’s the transmission of the data which matters, if only for a moment. Memorializing data Our lives and minds melded forever in the future. With our passing into the next life, our digital monuments will stand the test of time forever as a symbol for who we are and the valuable content we created for our connected peers.

Zancan’s “Garden, Monoliths” is the key collection from his long career as an artist. As a recovering oil painted, Zancan pursues natural scenes onscreen now, calling it “figurative generative art.” The scenes invoke a relaxing, ethereal feeling. Stranded aging monuments fading into oblivion while the world continues to evolve and grow. The pillars are from a time lost, where reverence was duly given to events and persons. When I look at Zancan’s work, I see the immortal.

Once my works and writings fades, the greatest cultural items from our time will survive and act as a testament to our age. In a converging physical and digital world, there will be no distinction soon between owning real and digital assets. It makes no difference that a great work like Zancan’s is immortalized primarily on Tezos.

When the historians of the future are digging through our NFTs, what will they think of this time period, the first decade of scarce value on the internet? Will punks and BAYC still command the relative prices and cultural domination they do now? Or will they fade to memory as our network technology improves and evolves.

I can see a point in the future when their significance has waned and have been replaced by newer shinier PFPs. Stories of their culturally additive nature will be written in the history books, but at some point, it just will not be fashionable to have a punk or BAYC as your defining characteristic online.

Fine art on the other hand demands to be interpreted. We do not try to become the representation of an artist's work, rather we strive to understand its place in time, culture and history. Because the creation of the work is separated from its existence, its like looking backwards into the universe to see its creation. At some point, a barrier prevents one from discerning the true nature of its creation. Hints can be found in the stars themselves, but ultimately, the piece will stand on its own, open for human interpretation.

Good art sticks around. It becomes the bellwether of the market and also the yardstick by which to judge the success of a platform and other artists in the collective. I’m firmly in the camp that Zancan is and will continue to be Tezos’ leading artist (outside of Xcopy making a return) who defines the cultural movement and serves as the leader of this new generation of generative artists on fxhash.

Much like my grandfather’s letters, the new immutable digital art will live on and give an insight into the past. We will keep searching for our own permanence in this world, however we design it. 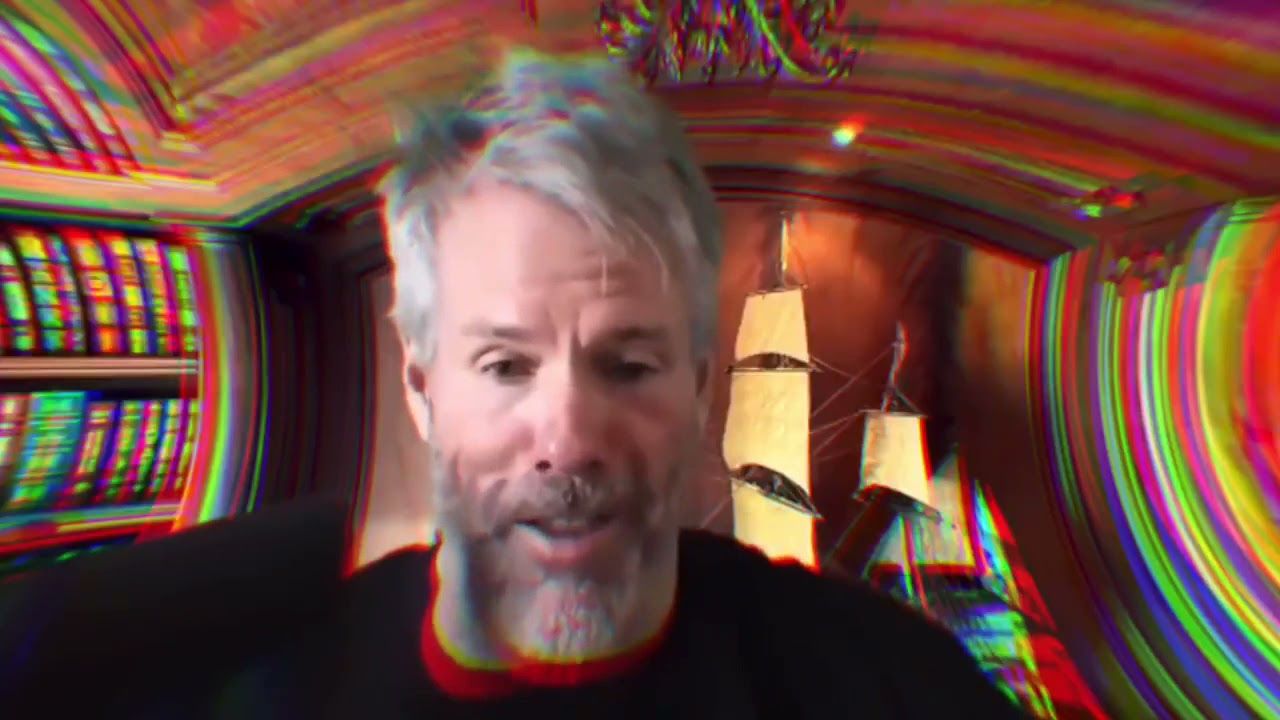 There was a post last night by my several time guest Patrick Dugan that caught my eye... > Saylor comes off